CALL OR EMAIL FOR INTERNET DISCOUNT PRICE !!! - - - THIS TOWN AND COUNTRY IS 100 PERCENT AS-IS AND MUST BE EVALUATED IN PERSON TO DETERMINE WHATS RIGHT OR WRONG WITH THE VEHICLE !!!

Model Overview
Ever since the Dodge Caravan hit the market in 1983, the Chrysler Corporation has been making great minivans. The 2007 Chrysler Town & Country continues in this vein, offering plenty of luxury along with enormous quantities of flexible space.

The Touring is the next trim, available only with the long wheelbase and costing $28,535. For the $2,500 premium it replaces the standard Town & Country's 3.3L V6 engine with a 3.8L V6, and adds a host of desirable equipment such as traction control, a roof rack, dual power sliding doors, a power liftgate, a cushier interior, and three-zone air conditioning.

Extras on the Town & Country include a trailer towing package, UConnect hands free communication, a rear seat entertainment system, and a variety of appearance and safety enhancements. Any of the various trims can be loaded up to suit your family's needs.

Perhaps the best standard feature on the Town & Country is the Stow'n Go seating system, which debuted in 2005. This system allows the third row to fold into the floor, and there are hatches in front of the middle row that can be used to store either or both seats. When the seats are up, these compartments can also be used to stash items out of sight from prying eyes, which greatly increases the utility of the vehicle.

The next best thing is the ride. Truck-based-SUVs ride harsher than minivans. And, the Town & Country has one of the most comfortable rides going. Both engines offer fuel economy that SUVs with this much stowage can't touch. 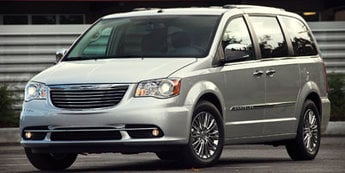